This blog demonstrates how Unison have changed the face of tube bending since our inception in 1973.

At Unison, we pride ourselves on the great steps we have taken to further what our customers can achieve with our equipment.

It gives us great pride to look back on what our company has achieved in the past, and we look forward to an equally innovative future.

During the 70s and 80s, Unison developed the control systems for many tube bending companies including Addison and Langbow 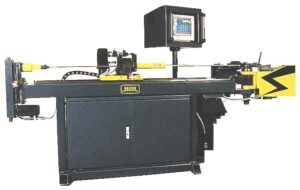 In 1993/4 Unison completed a feasibility research study into the possibility of removing the ‘Black Art’ of tube bending, by designing a fully automated tube bending machine. This method of control was revolutionary and enabled all positions and forces necessary to bend a tube to be stored and recalled by computer. This method of control was patented in both the UK and Germany.

And so arrived the world’s first all-electric 3-axis tube bender.

Unison developed the first three all-electric tube bending machines with; 20mm, 40mm and 65mm tube capacity. The very first machine went into service in 1996 and is still in production.

To find out about our current stock tube bending machines, click here.

Unison followed up their previous innovation by developing the world’s first all-electric 5 stack tube bender, allowing users to load five different sets of tooling, meaning tube could be bent at different radii. This eliminated the need to change tooling while processing a part, reducing time wasted during the change and preventing any human error.

In the years following the development of the 5-stack tube bender, Unison pushed the envelope of what all-electric tube benders could achieve, starting with designing and manufacturing a 76mm multi-stack machine in 2001, moving up to 115mm in 2004, 150mm in 2007 and finishing with the 180mm multi-stack in 2009. These machines had much better accuracy than their hydraulic counterparts making them the definite machines to process high quality parts.

Continuing with its philosophy of continuous development Unison developed a new machine capable of bending tubes up to 273mm for Westcon Shipyard. Generating 660,000Nm of continuous bend torque, our Unison 273mm still remains the world’s largest all-electric tube bender, exceeding the accuracy of its hydraulic counterparts while remaining more power efficient, ensuring our customers get the most out of their machines.

Watch our Westcon machine in action

Go back
We use cookies on our website to give you the most relevant experience by remembering your preferences and repeat visits. By clicking “Accept All”, you consent to the use of ALL the cookies. However, you may visit "Cookie Settings" to provide a controlled consent.
Cookie SettingsAccept All
Manage consent

This website uses cookies to improve your experience while you navigate through the website. Out of these, the cookies that are categorized as necessary are stored on your browser as they are essential for the working of basic functionalities of the website. We also use third-party cookies that help us analyze and understand how you use this website. These cookies will be stored in your browser only with your consent. You also have the option to opt-out of these cookies. But opting out of some of these cookies may affect your browsing experience.
Necessary Always Enabled
Necessary cookies are absolutely essential for the website to function properly. These cookies ensure basic functionalities and security features of the website, anonymously.
Functional
Functional cookies help to perform certain functionalities like sharing the content of the website on social media platforms, collect feedbacks, and other third-party features.
Performance
Performance cookies are used to understand and analyze the key performance indexes of the website which helps in delivering a better user experience for the visitors.
Analytics
Analytical cookies are used to understand how visitors interact with the website. These cookies help provide information on metrics the number of visitors, bounce rate, traffic source, etc.
Advertisement
Advertisement cookies are used to provide visitors with relevant ads and marketing campaigns. These cookies track visitors across websites and collect information to provide customized ads.
Others
Other uncategorized cookies are those that are being analyzed and have not been classified into a category as yet.
SAVE & ACCEPT