As a tube or pipe is being bent, the outer wall at the point of the bend begins to stretch and thin out. Simultaneously, the corresponding inner wall of the workpiece becomes thicker and more compressed. Controlling these degrees of physical deformation is important for creating a smooth rounded bend. Thick walled tubes bent at a wide radius are likely to have a relatively low degree of deformation, but thinner walled tubes will not. Unison typically measure the wall factor, which is the ratio of a tube’s wall thickness to its external diameter, and the “D” of bend, which tells us if the bend is on a large radius or a small radius, to determine whether bend difficulty. 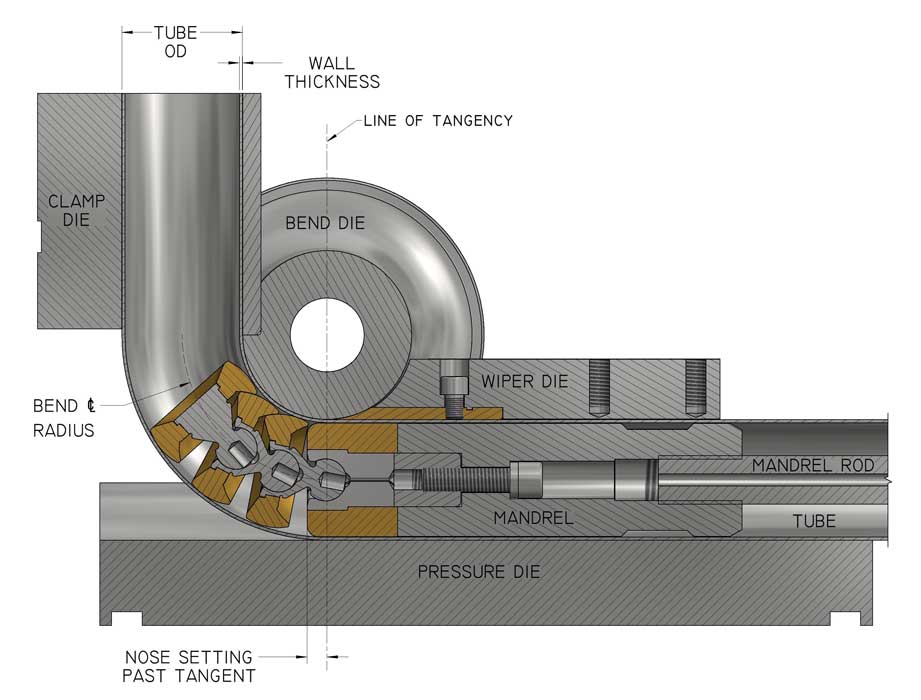 A similar comparison is made between the centerline radius and the tube’s external diameter to determine if a bending radius is tight or wide. The combination of the bending radius and the wall factor is used to designate the complexity of the bend. Under parameters in which the inner and outer walls would not be seriously comprised, a standard bending procedure can be performed with a basic die set, such as a bend, clamp, and pressure die array. The clamp die holds the tube in position, while the pressure die forces it against the bend die to curve into the desired shape.

In many cases, the tubing workpiece does not fit the ideal criteria and cannot be properly shaped using a basic die set. As the wall factor measurement grows larger from the external wall thinning, the bend radius also grows tighter and increases the chances of producing a flattened bend. This usually occurs if the wall is too thin to maintain its integrity at the angle of the bend. A mandrel is often used to compensate for this weakness. The mandrel is a device that can be affixed to the interior of the tube at the point of the bend to provide support throughout the operation. It can be designed as a single plug or a sequence of balls that flex and adjust according to the bend. Aside from providing internal support for thin tubes, a plug mandrel can also be used to exert additional bending force on thicker tubes that are more difficult to shape. 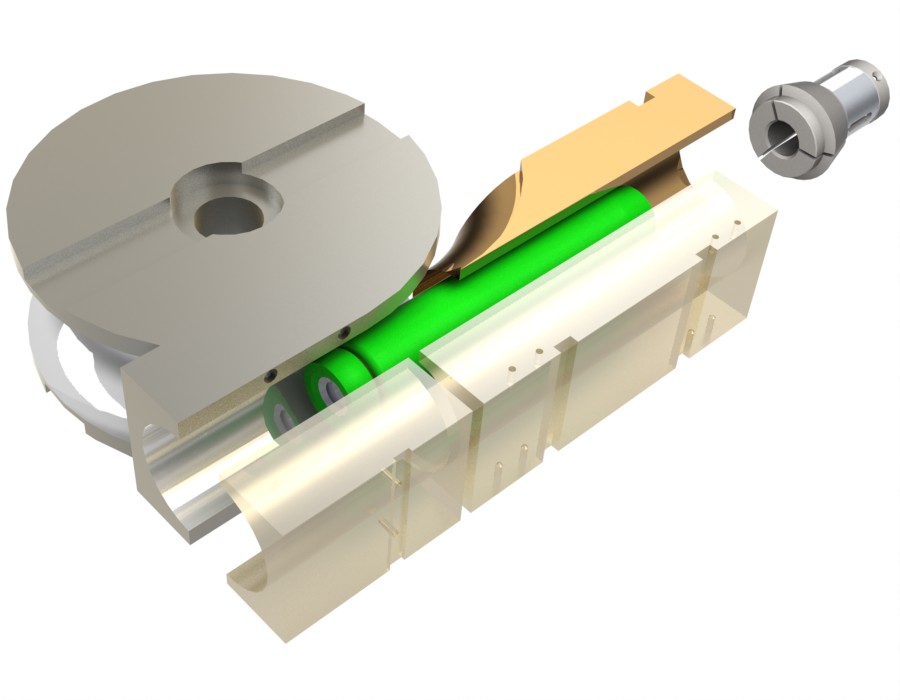 Under more severe bending conditions, like those involving thin tubing undergoing a tight bend radius, internal wall compression may develop unevenly, resulting in a wrinkle defect. A wiper die may be necessary in order to reduce the risk of wrinkling on the workpiece. This wiper is designed to be wedged into the groove between the tube and the bending die, and it has a thin tip that reaches to the point where the tube will start to bend.  The wiper completes the gap between the bending die and the tube, leaving the tube constricted and removing any space for a wrinkle to develop. Wipers are often used in conjunction with a mandrel to further reduce the potential for deformation. 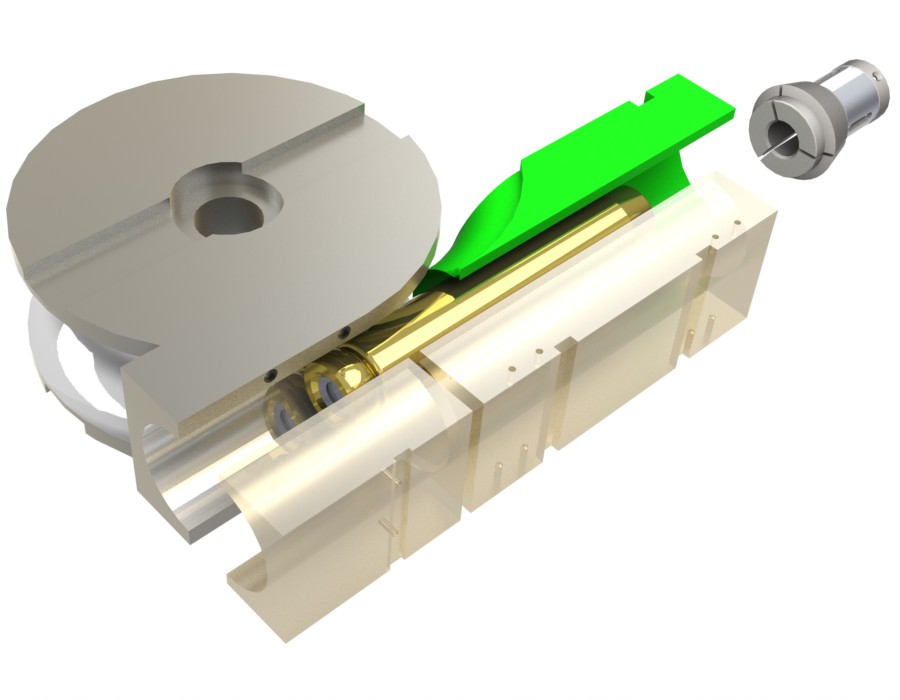 Elongation is the degree to which a tube can stretch before undergoing structural failure or cracking. Given that material stretching occurs in essentially all tube and pipe bending procedures, elongation can be an important concern for manufacturers. In general, as a bending radius grows tighter, the material will stretch more. In some cases, material selection is dictated by the expected level of elongation. For example, stainless steel has a higher maximum elongation than other grades of steel, making it easier to bend without fracturing along a tight radius

After bending a tube as with any material, when the pressure comes off the material doesn’t stay, it always springs back a little. Depending on the material the spring back can be so severe that it takes 189 degrees of bend to achieve the 180-degree hairpin. Due to the material springback, compensating by over bending and allowing the tube to springback means that the tube does not stay tight to the inside circumference of the former. Instead the radius grows for example if you are bending a tube to 90 degrees with a 95mm CLR former, the true radius after bending may be 95.95mm depending on the springback.

After bending one tube to 180 you may find that the next tube might come out to 179 or 181 degrees. If it’s welded tube, it has a weld seam somewhere on its circumference, and the weld seam’s properties are different from those of the parent material. Changing the weld seam’s location from one bend to the next is a sure way to change the amount of springback from one tube to the next.

Variations from one tube order to the next also play a role in springback. The steel itself varies a bit from heat to heat; the rolling process that turns the slab of steel into sheet also plays a role, as does the forming process in the tube or pipe mill.

For particularly tricky bending applications, specifying steel’s chemistry and ordering tube or pipe from the same supplier repeatedly helps to reduce these variations. Over the long run, consistent tube is usually less expensive than low-priced tube. 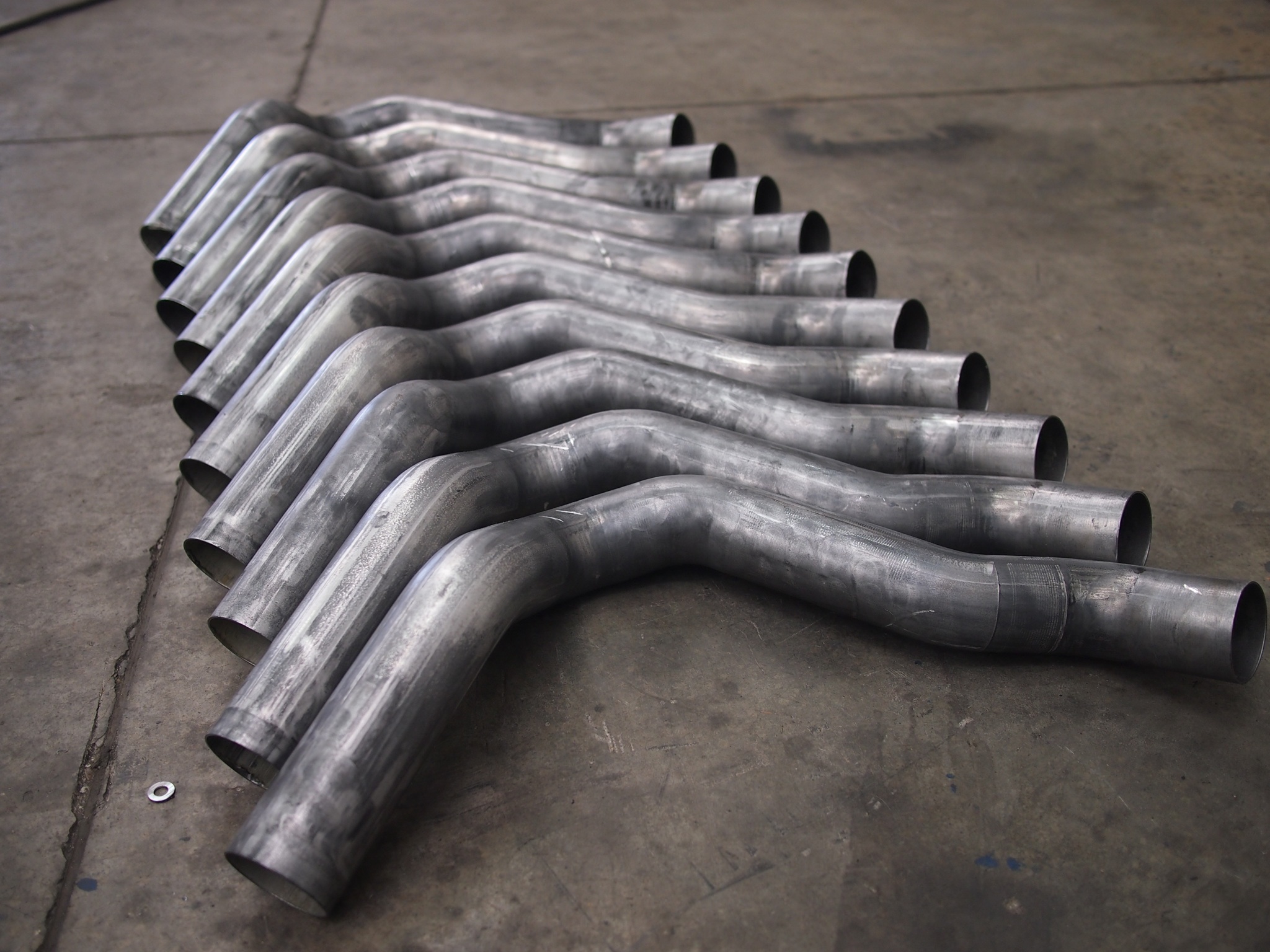 Go back
We use cookies on our website to give you the most relevant experience by remembering your preferences and repeat visits. By clicking “Accept All”, you consent to the use of ALL the cookies. However, you may visit "Cookie Settings" to provide a controlled consent.
Cookie SettingsAccept All
Manage consent

This website uses cookies to improve your experience while you navigate through the website. Out of these, the cookies that are categorized as necessary are stored on your browser as they are essential for the working of basic functionalities of the website. We also use third-party cookies that help us analyze and understand how you use this website. These cookies will be stored in your browser only with your consent. You also have the option to opt-out of these cookies. But opting out of some of these cookies may affect your browsing experience.
Necessary Always Enabled
Necessary cookies are absolutely essential for the website to function properly. These cookies ensure basic functionalities and security features of the website, anonymously.
Functional
Functional cookies help to perform certain functionalities like sharing the content of the website on social media platforms, collect feedbacks, and other third-party features.
Performance
Performance cookies are used to understand and analyze the key performance indexes of the website which helps in delivering a better user experience for the visitors.
Analytics
Analytical cookies are used to understand how visitors interact with the website. These cookies help provide information on metrics the number of visitors, bounce rate, traffic source, etc.
Advertisement
Advertisement cookies are used to provide visitors with relevant ads and marketing campaigns. These cookies track visitors across websites and collect information to provide customized ads.
Others
Other uncategorized cookies are those that are being analyzed and have not been classified into a category as yet.
SAVE & ACCEPT
Language